They say all roads lead there. They say power was invented there. They say when you’re there, you should do as they do. I had a few hours to see this timeless place, but just as they say that Rome wasn’t built in a day, I can assure you that it cannot be seen in one either. 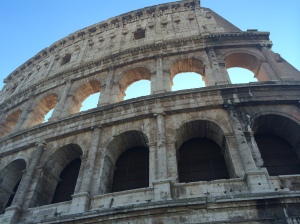 My friend, Carrie, and I were ecstatic to see The Colosseum, but being the curious explorers we are, we wanted to maximize our knowledge while being there. We invested in a tour that took us through The Colosseum and part of the Roman Forum. It was there that we found the most fascinating human imaginable. He works with National Geographic but does tours occasionally because he simply loves Roman history. He spoke with a level of intelligence and confidence that I had never heard before. Honestly, I wish to be someday just a fraction of the level of profoundness that he has reached. Carrie and I clung to his every word. Most of the information you’re about to read came from him.

Upon entering the most famous amphitheater in history, we were told some information and prompted to imagine we were there 2,000 years ago. Picture this:

Outside you are greeted by one of the most massive and intimidating buildings you’ve ever seen. It’s completely symmetrical and the top is lined with fierce statues. You enter the doorway under an arch and stand in line. Admission is 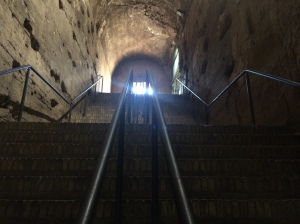 free to everyone, but the rich get priority so they go straight to the action. There are vendors selling foods and jewelry along the way and the building is so modern that it even has indoor plumbing. After gaining ground in your line, you reach the magnificent white steps. You go up, and there it is: Flavian Amphitheater. The Colosseum. You quickly choose your seat and take in the deafening roar of the crowd. You catch a glimpse across the arena at the emperor in his glowing white robe and you can see the shimmer of his golden armbands. He stands. It’s time to begin. Gates open on one end of the arena, and out pops a man covered in armor. The crowd slightly cheers, for he is a new fighter. Then from the other end, a massive chariot pulled by horses emerges. The crowd explodes, for this is the bravest gladiator in all of Rome. He is the attraction. The emperor gives his command and they begin their fight to the death. Your heart is racing as the two battle it out, but after a few seconds of fighting, a strange beast rises from a trap door in the floor! It’s enormous and gray, with big ears and strange, long tusks. You know this creature is from a land far away. It runs and chases the gladiators as they still try to fight. Then, the unthinkable happens. The favorite man is pierced by the new fighter. The favorite concedes! The crowd goes silent. Eloquently, the emperor stands. He looks upon the defeated and motions downward. He doesn’t think the loser fought his best, and he sentences him to death. Three ferocious lions are released, and you watch as they devour who once was the crowd favorite. The winner goes to receive words from the emperor, and he is now the most heroic gladiator in the empire.

I saw this as I walked through what is left of the amphitheater. Most of the seats are gone but I could see people sitting there just the same. The floor is gone – except for a partial recreation – revealing the catacombs that were once underneath, but I could see the gladiators in all their glory. I felt like I was part of history.

Upon further exploration and further details from the profound guide, I came to realize that people have enjoyed the same entertainment for millenniums. The Colosseum was actually the predecessor of today’s modern football stadiums. The resemblance is striking. Also, even though admission was free, seating was divided by class. Remind you of a VIP section? Gladiators were seen as celebrities. Girls screamed their names and fought for just the garment they used to wipe their brow, just as women did for Elvis or Michael Jackson.

There were not just gladiator fights in Rome’s empire; there were all types of entertainment. Ladies today have their chick-flicks. Likewise, there were dramatic productions and safe games that were more popular with the women. Guys today like a nice action film, perhaps with intense stunts and bloody gore. The gladiator fights suited them well. The Colosseum was bringing blockbuster spectacles to people hundreds of years before the moving picture was even an idea.

The Colosseum also kind of kept the piece. It held examples of what happened to people who didn’t uphold the law. Today, if you break the law, you go to prison, and if severe enough, you lose your life peacefully. In the old west, you wore a rope necklace. In colonial Salem, you were tossed into the river. During France’s reign of terror, the guillotine made your head roll. In Russia, you did a little something called “roulette.” It was the same in ancient Rome. If you broke the law, you met your death in an arena while hundreds of spectators watched. Any Hunger Games fans out there? Yeah, that basically happened.

Carrie, profound man, and I walked through a small section of the Roman Forum as well. It’s where all the business of Rome went down when it was at its peak. There, we learned more about how Rome influenced culture today. For example, some of the hand gestures we use are from ancient Rome. We shake hands when we meet someone because the Romans saw it as a business agreement. That’s also why when we marry someone, we ask for their “hand” in marriage (also a business agreement to them). Similarly, if you wanted to kill your adversary, you would shake his hand with your right hand and while 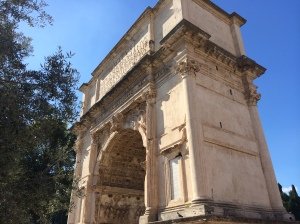 you had him in your grasp, you’d stab him with a hidden blade under your left sleeve. You can see where the expression “something up your sleeve” comes from. Also, to show people they didn’t have anything up their sleeves, nobles would lift their hands up to reveal their arms. That is why we wave.

My jaw was on the ground for most of the tour because of connections such as these.

At the end of the day, I was exhausted from taking in so much history, but even more in love with the first modern city. There is so much that I haven’t experienced in Italy, so I’m already dying to go back. Nevertheless, I walked on to the ship and said “Ciao” to the country I love… after I had one last gelato of course.