Day three of my Italian adventure included a different country to add to my list! Well, sort of. We went to Rome and spent the entire day exploring The Vatican City, which is technically its own country because The Pope rules it. It was a perfect day filled with indescribable paintings, statues, architecture, and lasagna that I’m dying to share with you. Sadly, I can’t give you a taste of the lasagna because the Internet doesn’t work that way. I’ve tried.

I can, however, give you some pictures of art so precious that it’s held at one of the most sacred places in the world. I give you… The Vatican.

We began our day with entering the official Vatican City and being shocked at its enormity. There are buildings upon buildings.

The Vatican is all about religion. Although it is the center of Catholicism, it also holds symbols and art from Protestant Christianity, as well as other religions including Judaism, Islam, Buddhism, Hinduism, and ancient polytheism. Since most of Rome worshiped many gods before the rise of Christianity under Emperor Constantine, there are a lot of works depicting Roman and Greek figures.

The Vatican contains historic exhibits from around the world. For example, there was one wing dedicated to the history of ancient Egypt.

There are of course paintings in The Vatican by some of the most famous names in history, and this particular painting is a doozy. It can be found in just about every art and world history book ever written. It’s The School of Athens by Raphael.

Although there were works of art placed in every direction, looking up was just as spectacular as looking around. The ceilings in The Vatican are magnificent.

There was one ceiling that stood out among the rest. That’s probably because it is the ceiling.

Completely taken aback, my friends and I encountered the sign that read, “Cappella Sistina.” With numb emotion, we walked into the massive room where rulers and peasants, famous and ordinary, saints and sinners alike have stood and marveled for hundreds of years. Silently, we looked up.

I can’t put to words what it’s like to stand beneath the Sistine Chapel. You can Google as many pictures as you want, but you’ll never be able to take in the level of detail. I walked right under The Creation of Adam portion and stood speechless. I don’t know how long I was in there, but while standing and admiring, I almost let a tear trickle.

Our exploration of The Vatican City ended with a trip to St. Peter’s Basilica. It’s where The Pope conducts his services. Although I am Protestant, it was still amazing to see such an iconic religious building. 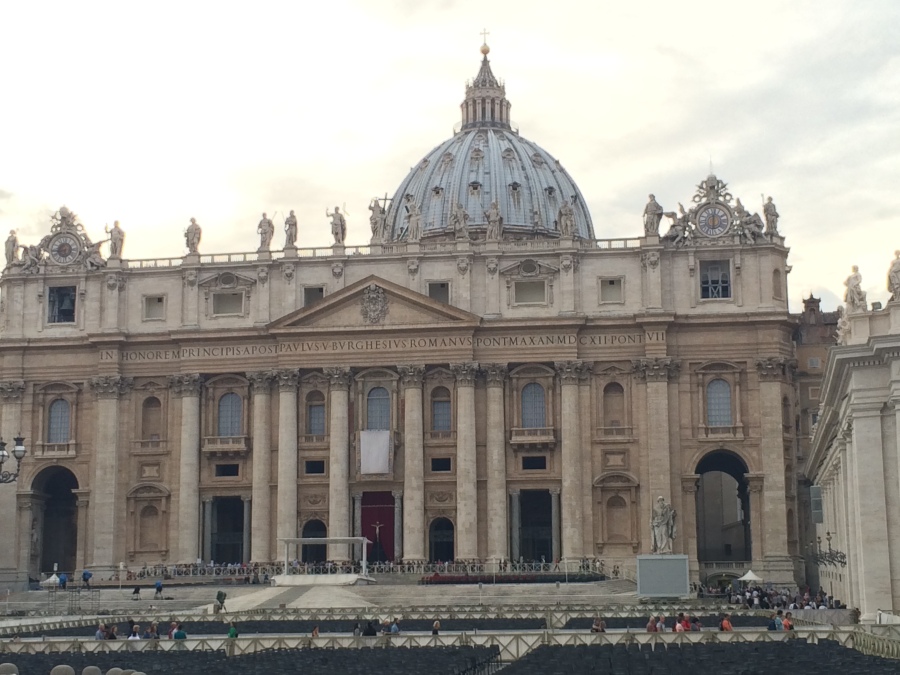 I am still trying to process every color, shape, form, and piece of information I’ve experienced today. I’m pretty sure that’s going to be impossible. The Vatican was mind-blowing. With that being said, I am falling more and more in love with the history held within the boarders of this country. I could stay in Italy for weeks and I couldn’t crack the surface. The ship is leaving tomorrow afternoon, so I have less than a day to see the main part of Rome. I’ll have to leave some things out, but you can best believe that my last day will reach colossal proportions.