After leaving the magnificent island of Capri this morning, we took a ferry to Sorrento and then a train ride – the most crowded train ride of my life where people were shoulder-to-shoulder and a lap dog took up residence on my feet – to do a little time traveling. Well, not really, but I guess it’s as close as we can get to time traveling. We went to Pompeii.

For those of you who slept in history class or those who just need a refresher, Pompeii was a bustling city 2,000 years ago. As an ancient metropolis and a neighbor to the all-powerful Rome, it was a model civilization. That is, until the year 79AD when out of the blue, a nearby volcano, “Vesuvius,” powerfully erupted. For hours singeing ash from the volcano rained down on the city, instantly covering everything and everyone. What did that cause? The entire city and all its inhabitants were perfectly preserved and frozen in time. Almost 2,000 years later, when the city was dug up, everything was just as it was before the volcano erupted, which gives us an insanely rare look at ancient civilization. Therefore, dear readers, I stepped back in time today.

The buildings were extremely decorative with detailed paintings, sculptures, and mosaics.

The streets were also very modern. Many had street signs and some even had parking places for wagons.

The following is a picture of a bakery. It was found with bread still in the oven!

The Romans worshiped many gods and goddesses before the rise of Christianity, and they built temples to honor many of them. This is the Temple of Jupiter, who was considered the main god and the god of the sky. Ironically, behind those clouds, Mt. Vesuvius is positioned in perfect alignment with Jupiter’s temple. 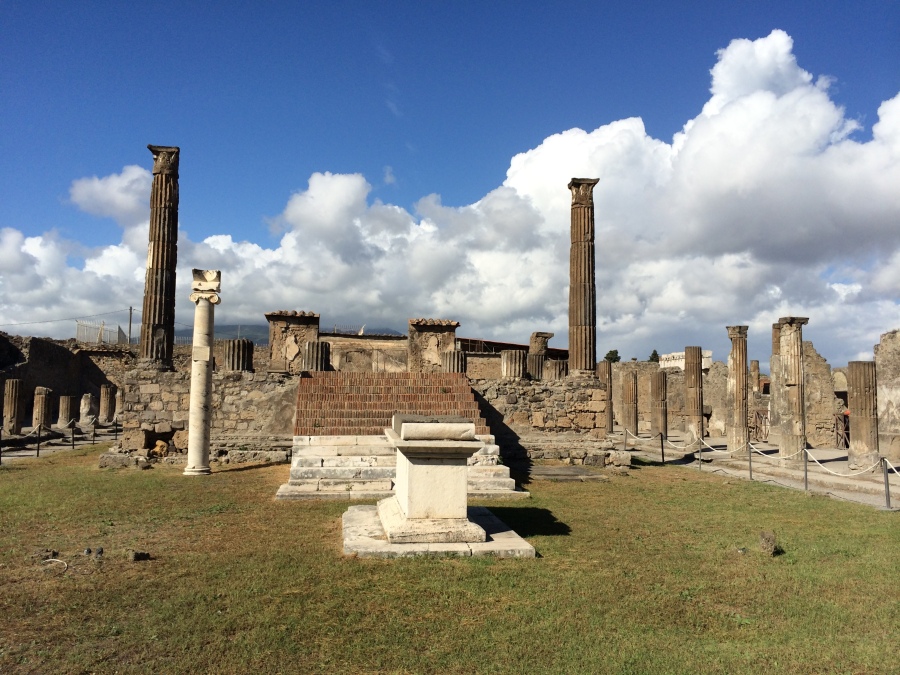 Pompeii even had places for recreation. The next few photos are basically the ancient version of a Y.M.C.A. 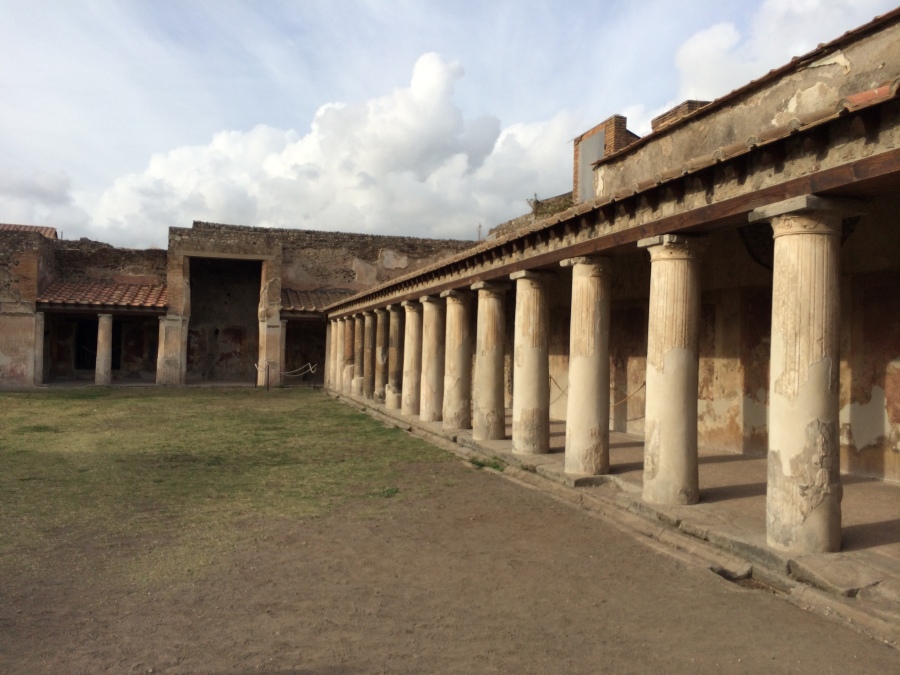 This was a swimming pool. 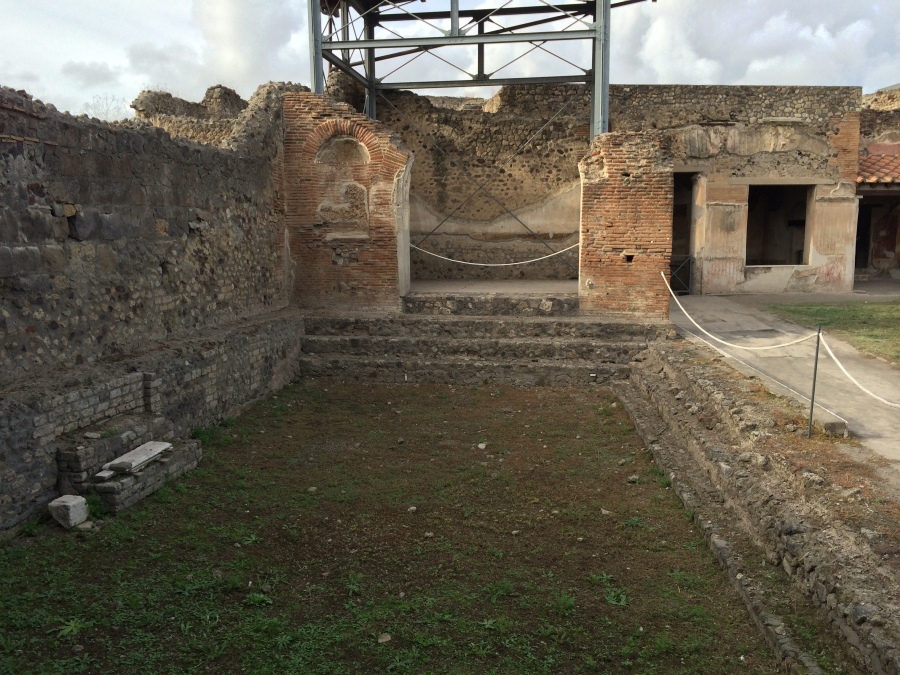 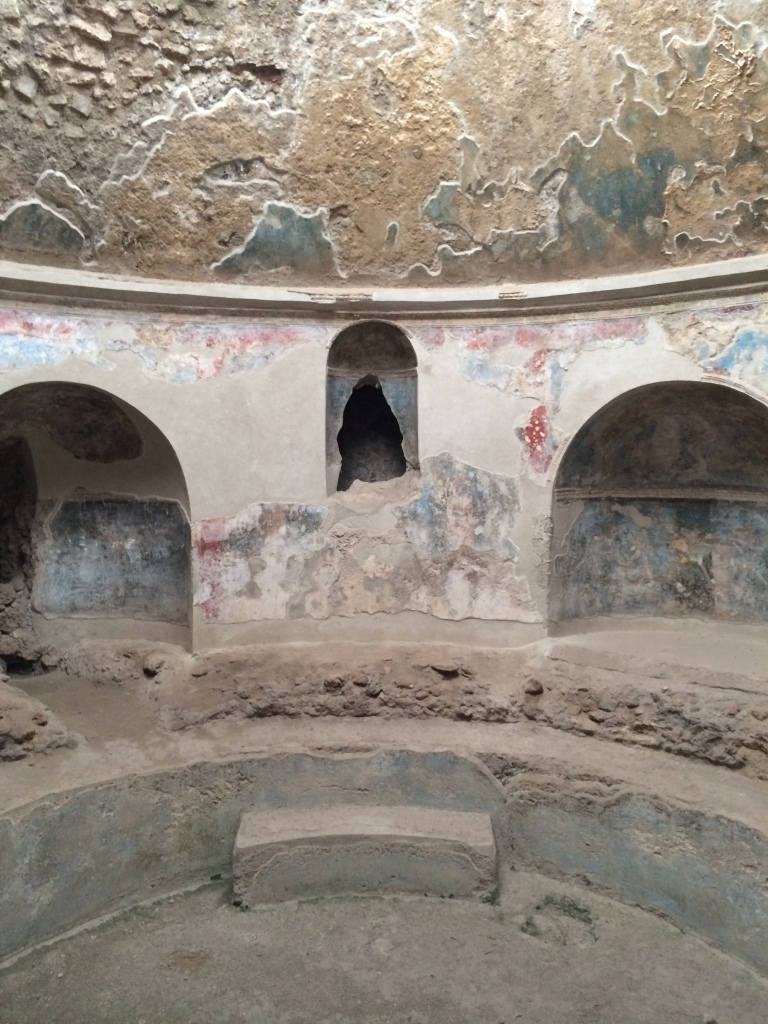 They even had locker rooms!

Restaurants could be found all over the city. Think of this one as a buffet. Large bowls for the food were positioned in those holes.

Instead of going to the movies to catch some entertainment, people in Pompeii went to their local arena. They saw gladiator fights, plays, and executions. Just your typical matinee at the coliseum. 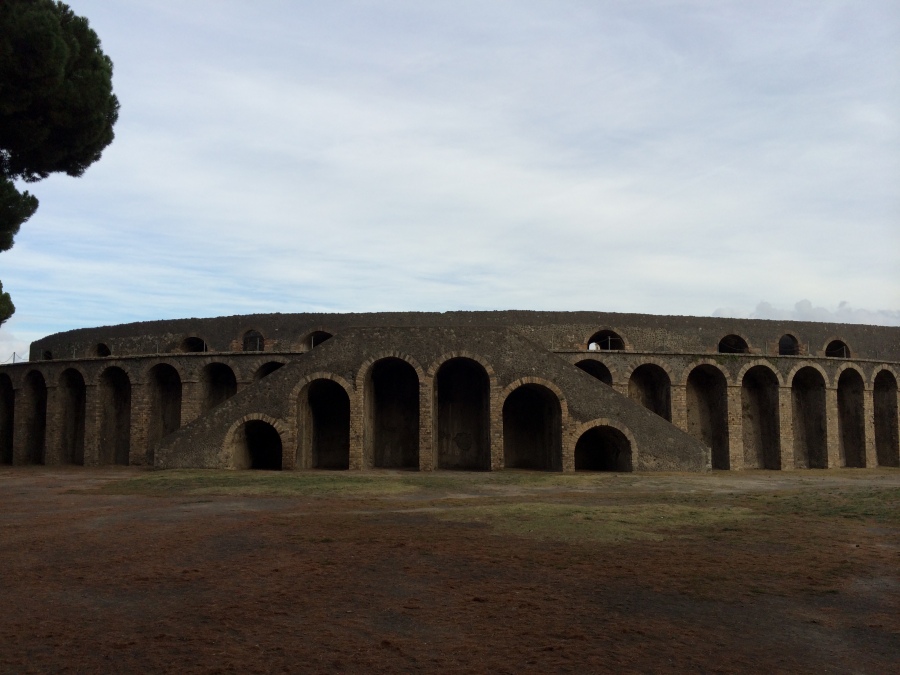 Today held one of the most fascinating adventures of my trip thus far. It was so interesting walking down the streets and exploring buildings that thrived so long ago. Before I arrived to Pompeii, I guess I just expected some crumbling buildings that all resembled each other and maybe some old pottery or something. I was completely shocked to find a huge area, covered in diverse buildings with distinct functions and ornate details. I was also intrigued to find how advanced everything was. The Roman Empire was pretty modern in its day, but I never thought about how modern it was until I saw it first hand. Pompeii had simple homes for the poor and large/extravagant ones for the rich. It had streets with street signs. There were numerous places to eat and some were even buffet style. There were hotels. There were offices. There were places to worship, view entertainment, relax, and play sports. It just goes to show, we people have been living the same way for thousands of years, and although we may keep advancing and keep inventing, we will continue to live as we have all this time.

One thought on “Time Travel”