A friend of mine, Sarah, and her roommates are famous for throwing parties with completely random themes at their house. Like, really random themes. How random? On Johnny Appleseed day, they threw a shindig in his honor. Their guests wore variations of flannel, suspenders, and pots on their heads. I’m not kidding. Obscure as they may be, the parties are hits. They bring in a house full of people who enjoy games, a banger music playlist, junk food, and a living room dance floor.

These parties at “The Treehouse,” as it is called, reached a new height a couple of weeks ago as three holidays became one: “Hallowthanksmas.”

Hallowthanksmas is that limbo period around the beginning of November. It’s that time when Halloween costumes, Thanksgiving pilgrim hats, and ugly Christmas sweaters are all acceptable.

From Halloween, it’s prime time for buying candy at drastically reduced prices. People still have scary movies in their queue on Netflix. The jack-o’-lanterns haven’t been thrown out and their insides are starting to get rank.

For Thanksgiving, sorority girls are dieting in preparation for the eighth of a pound they will gain during Thanksgiving dinner. Moms are calling incessantly about what time their babies will be home. People are already preparing their stories for their distant relatives to have an excuse as to why their “dates” couldn’t make the trip.

And then there’s Christmas. Let’s face it—the stores have stocked pre-lit garland and candy cane socks for weeks now, but early November is when the tinsel gets IN YOUR FACE. Starbucks has brought out the overly-anticipated holiday cups (which contain the most “extra” decorations this year because they will never make the mistake of having plain red ones ever again). The people I like to call “elves” are already fully decorated and they already have Michael Bublé and Mariah Carey on repeat. Disclaimer: I’m not a Scrooge; I just don’t go full-on Griswold until after Thanksgiving.

The time of the year when these three holidays somehow conceive a confused hybrid was the theme of a party. And the party was just as delightfully mismatched as you would imagine. It was as if Lady Gaga invaded her grandmother’s decoration box for an outfit.

Some people went all out for one single holiday. Some were a blur of all three. I saw turkey hats. Candy corn earrings. Holly blazers. There was even a Ralphie costume from A Christmas Story per a pink bunny get-up.

I donned a Christmas sweater my aunt made me in high school; it now poorly lights up thanks to battery-powered colored lights that are hot glued to an atrocious iron-on Christmas tree. I wrapped gaudy tinsel around a Game of Thrones crown I used for a Halloween costume a few years prior. I also added Aviators because why not? 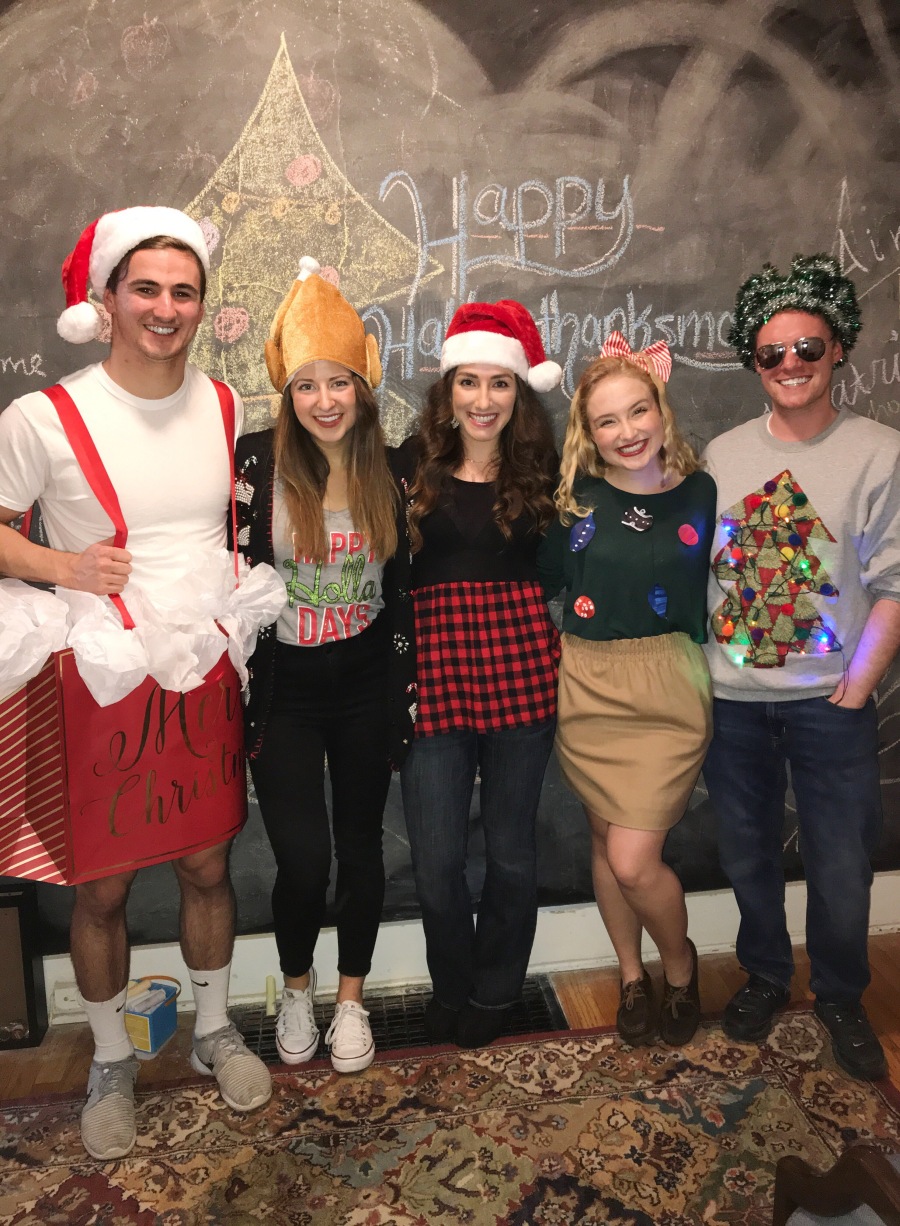 The night was fun to say the least. The ladies who live in The Treehouse had trick-or-treating in all their rooms. “All I Want for Christmas is You” blared through a speaker as a bunch of young professionals danced like uncool kids at a sixth grade formal. However, my favorite moment of the night was the turkey pardoning. I was the turkey.

You probably already know this, but there is a tradition every year involving the President of the United States “pardoning” a living turkey and declaring that it shall not die on Thanksgiving. It’s the most important job of the Commander in Chief. Anyway, Treehouse residents urged their guests to apply to be “pardoned.” There was literally an online application.

I applied, jokingly treating the application as a job application, even ending it with “References available upon request.” Apparently it worked, because the party stopped for me to kneel before the Treehouse residents, swear my loyalty to them, and receive a sash displaying the honor. It was one of my proudest moments. Countless people asked me to gobble for the rest of the night.

The hodgepodge of celebrations will forever come to mind as I think of early November now. I will remember the sacred time of Hallowthanksmas as three great holidays become one. I will think of being pardoned from death and almost losing my jiblets.

As Hallowthanksmas ended, I approached my favorite actual holiday: Thanksgiving. I seriously love the food, family traditions, and time of the year. But I have a good story to tell this year. Despite the looks I’ll receive from my family, you can best believe I’ll be rocking a sash at turkey dinner—one that reads “Pardoned Turkey 2017.”

No matter where or with whom you’re celebrating, happy Thanksgiving from What Are This. I’m extremely thankful to have you as a reader.